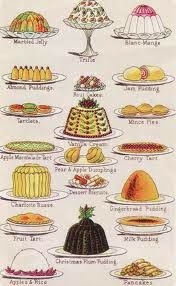 From Mrs Beeton
'Biancomangiare' sounds so much more exotic than 'blancmange' or 'cornflour mould' but, although it might have become nursery fodder and is now something of an anachronism, I like to think that blancmange is more than a mere 'cornflour mould'.
My researching of the history of blancmange began a while back but this post was prompted by a recent piece on The Cook and the Curator  which talked about blancmange being set with gelatin, and how the mould was chilled to get the mixture to set.
The blancmange I know, which my mother made, comes from the Good Housekeeping Cookery Book of 1949 where it goes by the unfortunate name of 'cornflour mould' and involves nothing more than milk, thickened with cornflour and flavoured with lemon rind and sugar.
Blancmange has a long history, it was ubiquitous in European cookery from as early as the twelfth century. According to the Oxford Companion to Food  blancmange is the Anglicized version of blanc manger which simply means 'white food' (although there is some debate about this, see Hieatt and Allaire-Graham references below) and in the 14th- and 15th- century English blancmangers were made of shredded chicken breast, sugar, rice and either ground almonds or almond  milk. Unlikely as this idea sounds the Turkish dessert tavuk göğsü (which is certainly made with chicken breast but doesn't always contain rice and is more usually made with cow's milk) is still popular and delicious, and these days something of a tourist attraction.
Although it appears there is no hard and fast proof that blancmange or tavuk göğsü  have their roots in medieval Arab cuisine it seems highly likely. Barbara Santich in her The Original Mediterranean Cuisine (Wakefield Press, 1995) says of blanc manger


this is one of the great classics of medieval cuisine, an international dish of high repute. All the recipe collections contain at least one recipe for blanc manger or menjar blanch. Its basic ingredients are ground rice or rice flour, milk or almond milk, sugar and rosewater...To these might be added shredded chicken breast, or fish or lobster in Lent.

In Delizia! The epic history of Italians and their food John Dickie talks about De honesta voluptate et valetudine  - Respectable Pleasure and Good Health (1465) the first printed cookbook. Written in Latin and authored by 'Platina' the Vatican librarian under Pope Sixtus IV, most of the recipes in this book originated from a professional cook, one Martino de Rossi. His version of biancomangiare (which Dickie translates as 'white eating') consists of peeled almonds and the boned breast of a capon pounded to a pulp and cooked with spices and sugar. Blancmanges like this were apparently often poured over meat and were highly prized, 'to achieve the desired degree of whiteness, it was prepared with particular attention to cleanliness, sometimes in a separate corner of the kitchen.' 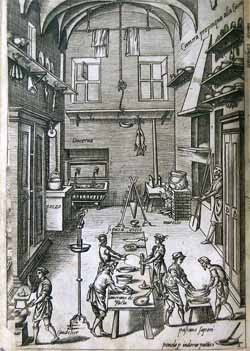 This illustration from Opera di Bartolomeo Scappi *(reproduced from Dickie) shows a Renaissance kitchen, with pies being prepared on the the long central table, sauces being sieved in the right foreground and the lone blancmange-maker on the left.

The Oxford Companion to Italian Food says that the popularity of  biancomangiare was 'its unearthly and expensive whiteness'.

Using white meat, ..., carefully prepared to retain its palor, and white forms of starch and sugar, biancomangiare would have glowed with the luminosity of a full moon among the sombre stews and sauces, the deep browned roasts, decorated with gold and silver, and the brightly coloured tarts, pies, and sauces of the banquet table. Like white linen and the ethereal pale complexion of a pampered princess, this delicate dish speaks of conspicuous consumption and a flagrant use of costly commodities.

Gosh!
Searching through the modern recipe books on my shelves, Claudia Roden  (A New Book of Middle Eastern Food) gives recipes for balouza (made with cornflour and water, flavoured with orange blossom or rose water with blanched almonds or pistachios) which she says is 'like white opaline encrusted with little stones' which 'trembles like a jelly'. Balouza Muhallabia is made with milk rather than water and the nuts are used as a garnish. In Moroccan Cuisine Paula Wolfert  includes a dessert called Mulhalabya which is made in much the same way and garnished with blanched almonds and cinnamon. In Anissa Helou's Lebanese Cuisine the dish is muhallabuyeh.
Mary Taylor Simeti (Sicilian Food) says that blancmange has been a Sicilian favourite for centuries and  likely arrived in Sicily with the Arabs. The 15th-century recipe she reproduces is very similar to that described in Santich, using ground almonds and veal or chicken broth (to make a savoury almond milk), rice flour, sugar, cooked chicken meat pounded to a paste and flavoured with sugar, rosewater  and served with 'a sprinkling of sweet powdered spices'. In Sicily the modern blancmange is made with cow's milk or almond milk and cornflour.
Whilst it might not speak of conspicuous consumption or glow in the dark I still like to think of 'cornflour mould' as a direct descendant of Medieval biancomangiare.

So where does the gelatin come in? The early blancmanges made from a good chicken or veal stock would have owed some of their viscosity to the gelatin extracted from the bones during the making of the stock but this was clearly supplemented with the pounded chicken flesh and starch of some sort, if indeed the intention was to produce a set blancmange rather than just a warm, thick goo. The thick goo would of course have set  to some extent once it cooled. Until gelatin made from bones was commercially available, around the middle of the 19th-century, making a jelly involved calves feet and a long and tedious process of boiling and straining and clarifying. Isinglass, gelatin prepared from the dried swim bladders of fish, was commercially available  from the late 18th-century (and is still used today as a clarifying agent in the production of wine and beer).** It follows that recipes calling for the use of either isinglass or gelatin would most probably date from the 19th-century.
According to the Larousse Gastronomique,  Carême  said of  blancmanges that 'these delicious sweets are greatly esteemed by gastronomes, but, to be enjoyed, they must be extremely smooth and very white'.
His recipe calls for almond milk that is filtered and strained and gelled with isinglass. Similarly both Eliza Acton and Isabella Beeton writing in the later half of the 19th-century also use isinglass.
Acton (Modern Cookery) does include a recipe for making blancmange using calves foot stock, cream or milk and finely pounded almonds but also includes recipes requiring isinglass. Of isinglass she has this to say


At many Italian warehouses a preparation is now sold under the name isinglass, which appears to be a highly purified gelatine of some other kind. It is converted without trouble into a very transparent jelly, is free from flavour, and is less expensive than the genuine Russian isinglass


A nice blancmange, if wanted quickly, can be made by using the powders prepared by Goodall, Backhouse and Co., or Yeatman. A blancmange for children may be made of Brown and Polson's Corn-flour. 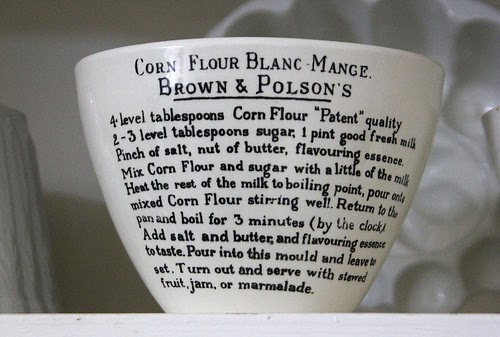 Using isinglass or gelatin then is perhaps a more refined, middle-class, modern approach to blancmange. But not without its pitfalls. At least with cornflour you know whether or not you have used enough to get the mixture to thicken to the right consistency. Setting with gelatin requires the right ratio of gelatin to liquid and the texture of the resultant gel depends on both the concentration of gelatin and the speed with which the gel forms. Cooling the liquid quickly results in a more fragile gel,  the gel formed at room temperature is more stable. More worrying is that the gel will start to breakdown if the temperature goes above around 30 degrees C, which may not have troubled mesdames Acton and Beeton but can be a problem in an Australian summer. And for my money the texture and mouth-feel of a blancmange made with cornflour is superior. Call me a philistine but I'm happy to stick with my 'cornflour mould' especially since it's really biancomangiare.

For a much more detailed and scholarly look at the history of and debate about blancmange see Erin Allaire-Graham 'From Fast to Feast: Analyzing the ubiquitous "White Dish"' and Constance B. Hieatt 'Sorting through the titles of Medieval dishes: What is, or is not, a "Blanc Manger"'.

* Of Bartolomeo Scappi, Dickie says he 'was undoubtedly the greatest cook of the Italian Renaissance'. His Opera, published in 1570 in six volumes, is 'a comprehensive cookery guide, and a meticulously illustrated monument not just to one exceptionally successful career but to the careers of those hundreds of nameless cooks who had brought Italian food to such heights.' There is more about the Opera here and see the original here. If you follow the links in this post you can also sample the translation and Deanna also includes a couple of his recipes.

**My favourite reference to isinglass is from the stage show 'Oklahoma'. 'The Surrey with the fringe on top' has wheels that are 'yeller', brown upholstery, a dashboard of genuine leather and 'isinglass curtains y'can pull right down, in case there's a change in the weather'.

*** Eliza Acton's 'Jaune Manger' required 8 egg yolks and was flavoured with the juice of 'four sound moderate-sized lemons' and a pint of sherry. In Delizia! Dickie describes a 'Yellow Neapolitan-style blancmange' from 1529 which involved almonds, boiled capon breast and sugar worked to a smooth consistency and then mixed with rice flour, cinnamon and ginger  and coloured with saffron. This was 'tempered with meat or capon broth and cooked with verjuice'. Cinnamon and sugar were added on top before serving.
Posted by Alison at 12:11 PM