Sharing a meal at Cumulus Inc. 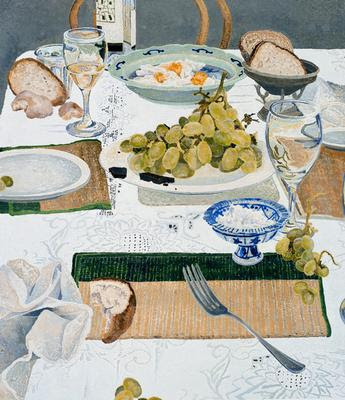 'After Lunch' Cressida Campbell
Last week I was in Melbourne. I love being in Melbourne.
Thanks to a friend well versed in the eating pleasures of this city we headed to Cumulus Inc in Flinder's Lane for dinner on Friday night. We were there at 6pm to ensure that we got a table (there are no bookings) and the place was already busy and noisy. (One of our party was 80 so sitting at a proper table was preferred over sitting at the bar however next time I want to sit up so that I can watch the food being prepared.)
Back in the mists of time the invention of the restaurant did away with the idea of sharing food in public. Eating out has come to mean sitting down to your own plate of food and perhaps allowing your fellow diners at best a token taste. Sharing a meal with friends in a restaurant translates as sitting at the same table with them and all eating at the same time but not actually sharing the same food. That is unless you are eating at Cumulus Inc. Here the food is meant to be shared - each plate has enough for three or four with plenty to choose from - and all of it delicious. It was great fun to be able to sample a number of different dishes and to talk about what we were eating. What's more we came away happily satisfied having only spent just over $100 for three of us on food. (The cost of the wine is another matter!) And Stephanie Alexander, who was eating at the next table, looked as though she was enjoyng herself too.
Posted by Alison at 4:17 PM No comments:

How to buy a cookbook

One of my New Year's resolutions/promises to myself  - along with spending more time with my friends and less time with my children - was to stop buying cook books and recipe magazines. Partly because of my belief that there really are no new recipes as such, just slightly different combinations of ingredients, and partly because I have no room for anything new - something already treasured would have to go to make some space on the shelves.

Faced with shelves of recipe books in almost any bookshop how do you choose which one to buy anyway?
Herewith my golden rule  -NEVER buy a recipe book which doesn’t have a good index  regardless of the other attributes it may possess.
Recipes are usually arranged into ‘chapters’ perhaps grouped around seasonal produce (spring, summer, autumn, winter or perhaps even Easter and Christmas), around specific ingredients (chapters on figs, eggplant, potatoes etc) or around types of dishes (soups, main meals, desserts, salads). The problem arises when you want to find say spinach salad – is it in ‘summer’ or with ‘salad’ or in the chapter on ‘spinach’?  Always check  the standard of the index. Is the ‘Cauliflower soup with Gorgonzola and pickled pear relish listed in the index under ‘soups’, ‘cauliflower’, ‘pears’ and ‘Gorgonzola’? (In fact in Skye Gyngell’s A year in my kitchen this recipe is listed under all of these headings – well not ‘Gorgonzola’ but ‘cheese’ which is fair enough). My pet hate is knowing that a recipe is in the book somewhere but not being able to crack the code in the index. I have more than one book on the shelves which indexes the recipes by the title of the dish – so ‘Warm chicken salad’ is indexed under ‘w’ and ‘Fresh tuna salad’ is indexed under ‘f’. (Is anyone at the Women's Weekly listening?) This might rate as quirky but really it is just infuriating.
Even when they get the index right one of my gripes with many recipe books is that the method is always very concerned with what to do but not often with why. How will the end result be affected if the directions aren’t followed to the letter? What are the really critical stages in the process? This is especially useful information if you are making something for the first time. Not every writer can devote their time to testing recipes  a la Julia Child  nor indeed does every recipe book need to include the detail of Mastering the Art of French Cooking but a little more description like "heat the butter until its foam begins to subside" and "beat the hot sauce into the egg yolks by driblets" and less reliance on convention and 'recipe speak' not only gives the book a bit of personality but also helps to make the recipes more accessible. 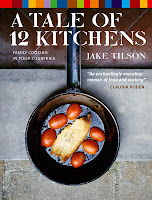 My own preference is for recipes which are not too prescriptive, which offer ideas for combinations of ingredients or a number of variations on a theme. And I prefer books with character, where the personality of the author comes through either in the way the recipes themselves are written or through head notes or introductions or simply in the way the recipes are presented. Books that have that certain something - perhaps it’s the illustrations, or the way the recipes are set out, the personal information included – jokes, stories, historical details – whatever it is that tells me something I didn’t already know or takes me off in another direction, inspires me to cook or simply to read more.
Some books which fit the bill (and already have a space on the shelf) are Nigel Slater's Appetite, Maggie Beer's Maggie's Harvest, Claudia Roden's A Book of Middle Eastern Food and for looks and originality Jake Tilson's A Tale of Twelve Kitchens which is absolutley essential reading for any one who may have the desire to prepare Mexican food in a motel room.
Posted by Alison at 4:16 PM No comments: 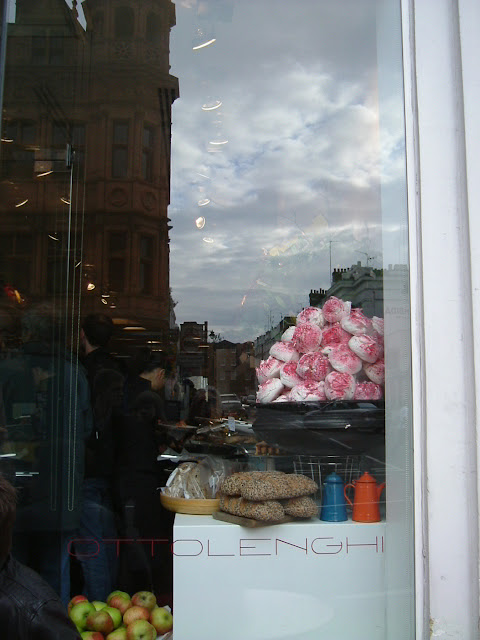 Ottolenghi , 287 Upper Street, Islington is the sort of place where I would like to be able to eat much more often. ‘Fine dining’  and 'molecular gastronomy' have their place I suppose but I prefer not to get dressed up to eat out and don’t feel comfortable in the environment many restaurants perpetuate with staff who give the impression that they are lowering their standards by having to serve you. Ottolenghi specialises in simple dining.
It looks simple - the space is long and narrow and white with one communal table running the length of the room. The decoration is the food itself – front shelves piled with cakes and gorgeous billowy meringues, a table covered with bowls of salads (fabulous contrasts of colours), and boxes of groceries destined for the kitchen. The menu is a simple in form – an A4 page of the day’s choices (when I asked for a souvenir copy one was quickly run off the printer for me) – and in process – the price is set and depends on the combination of dishes you choose. On the day I am there for lunch the menu lists 11 salads and six ‘main courses’. The idea is to order as much as you think you can eat – either a choice of three or four of the salads (£9.30/£11.80), or, a combination of two or three of the salads and one of the ‘main courses’(£12.30/£14.30).
The food itself is deceptively simple. This is the sort of effortless food that results from careful experimentation with the balancing of flavours and textures and relies on the best fresh, seasonal produce.
For example salads such as


can be teamed with main courses such as
or

Little wonder then that the place is popular. When we arrived on a Saturday afternoon there was a queue at the door, standing perhaps a little too close to the food on display, and we waited 20 minutes to be seated.(It isn’t necessary to eat in Islington to enjoy the Ottolenghi experience because all the food can be purchased to take home and there are branches in Notting Hill, Kensington and Belgravia. And if all else fails there is Ottolenghi, The Cookbook.)
Eating here was really the highlight of our few days in London and this style of dining – the environment and the menu – seemed like such a perfect fit with the Sydney climate and lifestyle that it seems ridiculous we had to go so far for the experience.
Posted by Alison at 10:11 AM No comments: