﻿ ﻿ October is Food Festival month in Sydney which means an orgy of chefs and restaurants strutting their stuff. This year the highlights included a presentation by René Redzepi at the Sydney Opera House. Over the preceding weeks and indeed subsequently there has been much written about Mr Redzepi, his restaurant and his food philosophies. So although I haven't actually met the man I would have to say that I feel reasonably well acquainted with him. He is a pleasant enough young man, he speaks well, he has some interesting things to say and he has a sense of humour, something which few others appear to have noticed.
How else would you explain the fact that he gets away with foraging for bits and pieces in the forests, fiddles with them in the kitchen, charges a fortune for them and gets called the greatest chef in the world? I had thought that I was perhaps the only person who had seen the irony in taking wild raw materials, torturing them a bit (quite literally in the case of the live shrimp he dishes up), serving it on a warm rock and then suggesting to the consumer that they were in some way communing with nature. Many of his dishes take hours if not days to prepare, how can he suggest that he is keeping the link from origin to plate as unbroken as possible? Can he be serious in suggesting that anything you eat in a restaurant  is likely to bring you close to the forces of nature? So it was with a sense of joy and relief that I read Keith Austin's piece on his experience sitting at the feet of the great man - here.
Don't get me wrong - I find the Redzepi approach fascinating and I wish the man well but doesn't it  make you stop and ask  'Que?'
The big disappointment is that Mr. Redzepi's visit does not seem to have engendered any on-going interest in some of the bigger questions about our fascination with restaurants (why we go out to eat, what we expect from the experience ) and with celebrity. The media has however taken up the cause of indigenous ingredients and why we don't use them or even appreciate them (see Carli Ratcliff here) which gets us back to the old problem of culture and cuisine. If, as Mr. Redzepi affirms, cuisine is 'a palatable experience of your culture' then what do our palatable experiences tell us about our culture?
Posted by Alison at 2:13 PM No comments:

The anthropologist in me just loves this piece. I've been doing a good deal of reading about dining out and the rituals of the restaurant and this was a refreshing change from academic writing.
Posted by Alison at 11:41 AM No comments:

I told you so 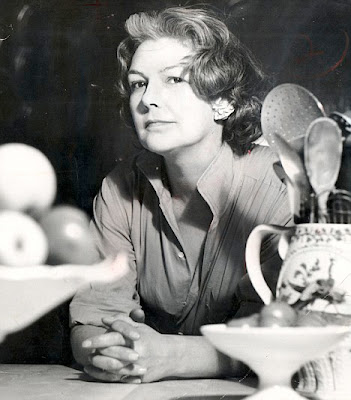 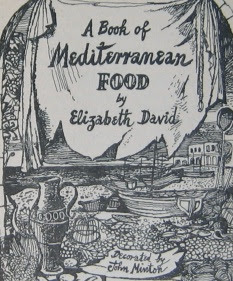 Last night I attended a tribute dinner to honour Elizabeth David at Bird, Cow, Fish restaurant. Coincidentally the evening also celebrated the 60th Anniversary of the publication of her first book A Book of Mediterranean Food.
There were a few speakers who reflected on Ms. David's work, her influence at the time and her legacy which provoked some interesting discussion of her relevance today, somewhat along the lines of a similar discussion in the Guardian (here) which, thanks to the wonders of modern technology, most of those in attendance had had the time to read before coming to the dinner.
The general conclusion would seem to be that whilst we have come a long way since 1950 we haven't actually travelled very far - more like just going around in circles. David celebrated fresh, seasonal ingredients, handled simply and well which might have been revolutionary at the time but since then we have just been reinventing the wheel.
Whilst there is some truth in the argument that some of what she wrote sixty years ago is perhaps a little outdated and some readers might find her authoritarian approach both intimidating and rather old fashioned,  the general consensus last night was that what might be perceived today as her weaknesses are more correctly appreciated as her strengths. As Alex Herbert herself remarked  a 'teacup' full of this and a 'handful' of that do not make for a precise formula but the idea of David's recipes was to inspire people to experiment, to taste, to gain confidence to learn how to cook and to enjoy doing so. In that context another strength of her books is that there are no pretty pictures - there is no 'plating up', there is no template to aim for, there is no in-built expectation.
And almost universally around the table there was a lament that there seems to be so little good food writing in print today. Newspapers and magazines in Australia simply do not publish anything much other than restaurant reviews, recipes and brief, journalistic advertorial. Print media is supposedly in its death throws - perhaps that's as much because there is never anything in the daily paper that is worth reading as anything else. I would venture that most of us interested in more than just the consuming of food get most of our reading via the Internet but even so there is precious little that is well written, stimulating and informative - unless I am missing something.
As to the dinner, Alex Herbert did us proud -

Chicken Liver Crostini (An Omelette and a Glass of Wine)
Moules Mariniere with grilled olive bread and rouille (A Book of Mediterranean Food  with a nod to Damien Pignolet and Claudia Roden)
Grillade au Fenouil
(Grilled Snapper on a bed of grilled fennel with Pommes Anna)
A Provencal salad with celery, watercress, orange and parsley (A Book of Mediterranean Food)
Lemon Soufflé with strawberries and vanilla ice cream (French Provincial Cookery)
Yarra Valley Black Savourine goats cheese, panforte, lavoch and 'fruitons'
and finally coffee with Budgi Werri prunes in Kennedy and Wilson chocolate
All washed down with some very delicious wines including a luscious 2008 Ata Rangi Crimson Pinot Noir.
Certainly those at dinner last night have a lot to thank Elizabeth David (and Alex Herbert) for.
Posted by Alison at 1:16 PM No comments: