Eating Out - the Wedding Feast at Cana

Many a visitor to the Louvre comes away a little disappointed by the Mona Lisa. To my mind she looks a little drab and small for all the attention she is given and these days it is impossible to get anywhere near her because of all the security precautions to say nothing of all the tour groups. If you stand facing her you also miss out on one of the greatest joys of a visit to this museum, a painting that La Gioconda has eternity to contemplate, Veronese's Wedding Feast at Cana. 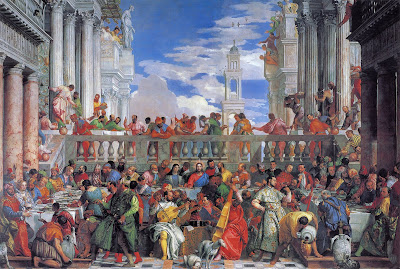 It is impossible to get a real sense of this painting from reproductions because it is enormous – 6.77 metres high by 9.94 metres wide. Painted in 1562-3, it was originally commissioned by the Benedictine monks of San Giorgio Maggiore in Venice to fill one whole wall at the end of their refectory. Since then the canvas has had a chequered history. It has survived being cut in half and spirited to France by Napoleon, been preserved through numerous European wars and most recently been restored after being damaged whilst hanging in the Louvre. Although the original still resides at the Louvre, thanks to modern technology a facsimile now hangs in the proper location at San Giorgio Maggiore.

Veronese's subject is Christ's first miracle, the turning of water into wine, which was performed at a wedding banquet in the village of Cana. Christ was a guest at the banquet along with his mother and his disciples. When it is apparent that there is no more wine for the guests Jesus instructs the servants to fill containers with water which when tasted has turned into excellent wine. Veronese's version of these events does not depict a simple, rustic feast in a dusty village but a sumptuous Venetian banquet. No doubt the monks contemplating this scene as they ate would have been aware of all sorts of religious symbolism. I am more interested in what this painting can tell us about dining in Renaissance Italy.

First of al I love the colours – the glorious blue of the sky and rich colours used to convey the luxurious fabrics worn by the wedding guests and the officials involved with the feast. The fabulous outfits worn by the bride and groom on the left of the picture, the velvety green of the man on the left (supposedly the governor of Cana, the master of ceremonies) presenting the wine to the groom and the rich brocade of the wine steward on the right examining the wine in his glass. 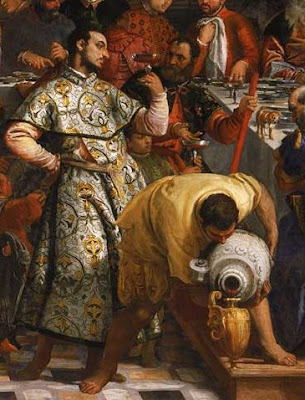 The sense of luxury attests to the wealth of Venice and the power of its citizens as does the rather eclectic attire of the guests. Powerful family dynasties used marriages to forge strategic political alliances with other courts in Italy and Europe, and welcomed aristocratic visitors and guests from far away and exotic places. Men of status used banquets as a means both to show off and to maintain that status. The celebration of an event such as a wedding was an opportunity to demonstrate hospitality and to communicate wealth and power.
What you served your guest and how you served it also communicated who you were. In this case the table is covered with a crisp, white cloth and laid with expensive looking plate. Everyone appears to have their own place setting including a knife, fork and napkin suggesting not just wealth but also up to the minute fashion, testimony to the host's good taste and sophistication. 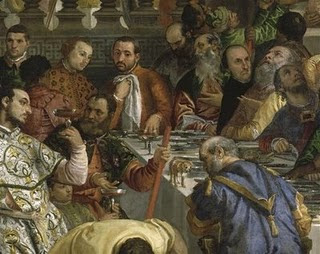 Intricately folded table napkins were becoming popular table decorations. Eating with forks was still something of a novelty as was the idea of eating from individual plates rather than sharing from a common dish. The wine is served in delicate glass goblets – with large shallow bowls which maximised the amount of wine exposed to the air – which is also an allusion to the skill of Venetian glass makers. At the top of the staircase on the left of the painting jugs and plates are being taken down from the credenza where they were displayed for all to see. Cold food was prepared on the serving tables adjacent to the credenza.

Although no one seems to be eating much and there doesn't seem to be much food on the tables there is a flurry of activity in the background indicative of the number of people and the amount of effort involved in producing food for a lavish banquet. Food was usually presented as a sequence of hot and cold dishes and a meal might consist of nine or ten courses, each course consisting of several different dishes. Perhaps by not showing food on the table Veronese was avoiding any suggestion of gluttony while creating a table and a setting which would reflect an occasion befitting the attendance of Christ as a guest and also the Benedictine dictum of hospitality.

All the guests seem to be enjoying themselves, chatting to one another (although none of them do appear to be actually talking), taking in what is going on around them and enjoying the musical entrainment. There is a real sense of conviviality.
There are two things which puzzle me about this picture. The first is the woman on the left who is looking down the table at the bride with what looks like a toothpick in her hand. 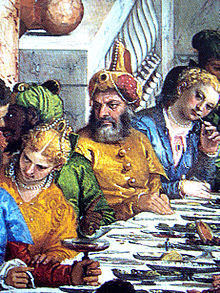 Bejewelled toothpicks were probably still fashionable at this time, they appear in household inventories which survive in the Archivio do Stato in Venice, although the the practice of wearing them on a chain around the neck may have been considered a little uncouth. However from the examples that survive and the paintings which show them being worn, these toothpicks were curved, talon like whereas whatever Veronese's young woman is using appears to be straight. One suggestion is that she is sucking pensively on a fork.* She is obviously doing something, and something distinctive which sets her apart from the others at the table. Whatever it is Veronese included it deliberately but why? Veronese included lots of little details that his viewers must surely have found acceptable and recognisable - like the number of dogs and cats there are in the scene. 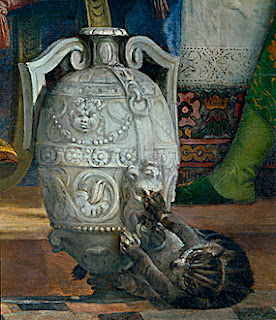 There are only two characters in the painting who look out at the viewer. Amidst all the back and forth in the background and the chatter and activity in the foreground Christ sits in the centre, calm and tranquil, gazing down on the monks as they eat their meal. Clearly not against everyone having a good time Jesus remains aloof from the action around him. 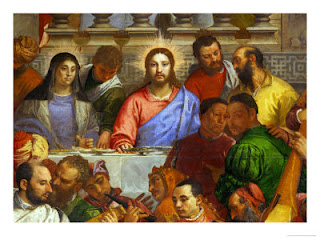 The only other person not entirely involved with the action in the painting is the bride herself. She seems oblivious to what is going on around her – to the earnest man on her left who seems to be talking to her, to her husband on her right, to the pageboy handing up the glass of wine, to all the noise and commotion. What is she thinking? What did Veronese intend we should think of her? 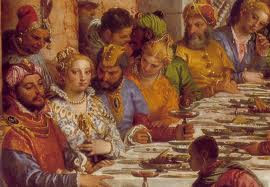 *This is the suggestion of Roy Strong in his Feast. A History of Grand Eating (Jonathan Cape, London, 2002)

To see how the painting in its original context and to learn more about the facsimile go to Factum Arte.
Posted by Alison at 5:14 PM No comments: