Ode to the Aubergine.

﻿
Luis Meléndez is one of my favourite still life artists and so I wanted one of his works to illustrate my Ode to the Aubergine. Unfortunately in this instance he seems to be more interested in the tomato. What does please me about this painting is its simplicity - the plain wooden table, the rustic pottery bowl, the feeling that these vegetables have been plonked down on the kitchen table ready to be sliced up for the next meal - and the way the subject fills the field of vision and focuses your attention.
Meléndez painted the ordinary things of everyday life, the fruit and vegetables and kitchen objects he would have found in his kitchen at home. Neither the tomato nor the aubergine is native to Europe. Tomatoes were brought back from the New World by Spanish and Portuguese explorers. Unusual both in appearance and taste, and a member of the suspicious nightshade family, the tomato didn't become generally acceptable in gastronomy until the 18th century. Aubergines, also nightshades, originated in India and travelled along earlier trade routes, certainly coming to southern Spain with the Muslim occupation if not before.
Meléndez painting suggests  that the artist probably liked his food and  knew that aubergines and tomatoes and onions were made for each other, with the implication also that by this time (the 1770s) these ingredients were no longer unusual. Thanks to the way he brings his subject to life, when you look at this painting today you don't just see what Meléndez saw but you can almost taste what he tasted. The stars of the show, the tomatoes, with their wonderful rich colour  and their glorious sheen promise intense flavour while the hoary, prickly calyxes of the aubergines hide their contents suggesting that there might be hidden pleasures inside.The onions are subordinate but  have a significant role both in the structure of the painting and the flavour of the dish to be prepared.
What interests me too is that some 240 years after Meléndez arranged this composition all the ingredients are still immediately recognisable for what they are, albeit that the deeply ridged tomatoes are now what we would call 'heirloom' and the aubergines look small and undernourished compared to the commercial varieties which we are picking from the garden at the moment.
Hence my Ode to the Aubergine.
The plants themselves are lush and robust with big, lobed, slightly downy soft green leaves and small unassuming purple flowers. They have been so easy to grow - seemingly oblivious to any sort of pest or disease (although one or two have succumbed to sunburn) and existing on minimal amounts of rain. Everyday I pick more of the fruit, heavy and tight in their skins, so shiny they look as though they have been polished and a deep purple-black like no other colour.
And we have eaten them in every form you can think of, dishes with exotic names to do justice to the exotic appearance of the fruit - smokey baba ghanoush style dips, parmigiana di melanzane, tian d'aubergines, ratatouille, caponata, imam bayildi, moussaka, melitzanes papoutsakia, baigan pachchadi and the cupboard is stacked with jars of kasaundi. I've fried them, grilled them, baked them, barbecued them; sliced them into rounds, sliced them length ways, cut them into cubes, scooped out the flesh and stuffed them, and still they keep coming. It's tempting to think of the poor aubergine as a cross between Jack's bean stalk and something out of The Sorcerer's Apprentice.
On the other hand when struggling with what to feed the family there is great pleasure in knowing that there is always something in the garden to provide inspiration.
From me the aubergine gets five stars - good to grow, good to look at, good to cook with, good to eat and good to share. My Turkish friend Haluk turns 50 today and his gift will be a bag full of freshly picked aubergines which I know he will appreciate and put to good use.
Posted by Alison at 4:23 PM No comments: 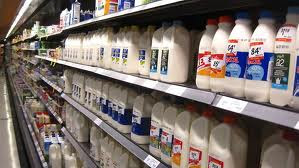 The big supermarket chains, Coles and Woolworths, are selling their generic brand fresh full cream milk for $1 per litre. Two questions - how and why?
How can they afford to do this? Well Woolworths admit that they are only reducing their prices to be competitive and that they don't see how they can maintain this level of cost cutting. To date it is the retailers who are bearing the reduction in profit but dairy farmers are justifiably anxious about the long term implications for them if supermarket prices remain this low.
Dairy farming is no picnic since cows produce milk all day everyday and someone has to be around to see that they are milked. The raw milk is then sent off for processing. The processors sell their own brand of milk and also negotiate a price with their customers and competitors - the supermarkets. The dairy farmer is paid by the processor at a rate which clearly depends on the price the processor receives for the pasteurised milk. The processor gets a higher return on his own branded milk than on generic, supermarket brand milk so whilst lowering the price of milk in the supermarket may mean that more milk is sold overall the return to the farmer must eventually be reduced. Coles may well argue that they are not out to hurt the farmers and really only want greater transparency of farm gate pricing but at $1 per litre surely no one makes and money - transportation, refrigeration and packaging alone must eat up most of the price.

Why are Coles cutting the price of milk? Well the answer seems to be 'because they can'. In marketing terms they presumably hope that by cutting the prices on essential items customers will flock to their stores in the belief that Coles only wants what is best for their patrons. Along the way of course the shoppers will buy other items and eventually be so convinced that a Coles supermarket is a consumer paradise they will never want to shop anywhere else.

What alarms me is the power that retailers have to control what we eat - not just what we can afford to buy but what is actually available to us. Whether Coles persist with maintaining this price war or not it is worth pondering what might result if they do. One consequence might be that branded milk disappears from the supermarket altogether. In other words you buy Coles/Woolworths milk or you have to seek out milk from small independent dairies which will inevitably be more expensive. (At the moment it is possible to buy milk from independent processors but at around two and a half times the current price of Coles milk).
The two largest milk processors in Australia - National Foods and Parmalat - are not Australian companies. It probably doesn't matter all that much to them whether Australians have fresh milk in their supermarkets or not. According to Coles 50 percent of our milk production is exported and only 25 percent of total production  is fresh milk, so one consequence might well be that fresh milk disappears from the supermarket altogether and we end up only producing, if not importing, UHT milk. Anyone who has travelled in Europe will know that in many places UHT milk is much more common than fresh, refrigerated milk.

Clearly we can't rely on the moral conscience of the people who run the supermarket chains to make long term decisions about our food supply.Who has the authority to stop Coles and/or Woolworths doing whatever they want? As consumers one approach would be to boycott Coles and Woolworths and only buy branded milk.  At least this strategy would mean that the dairy farmers would continue to get a reasonable return for their product. This is easy for me to say because I can afford to pay for my principles. I don't buy fresh fruit or vegetables or meat from the supermarket and never buy anything that is a house brand but there are plenty of others who do and who welcome a reduction in a family staple with open arms.
Only buying milk from independent, locally owned processors sounds like a good idea but again only for those who can afford it and with the proviso that probably this approach won't be much help the dairy farmers who rely on contracts with the two big processors.
Given the amount of milk my children consume I have often toyed with the idea of taking control of our milk supply and buying a cow of my own but I think there are probably local council regulations which have something to say about grazing cattle in the local park.

What I don't understand is why they, that is the Federal Government, doesn't/can't do something. Isn't that what governments are for? If part of the role of government is to see that everyone has access to an education and to health care don't they also have a responsibility to ensure that everyone has access to a healthy and stable food supply?
CHOICE advocate a National Food Policy (how is it possible that we don't already have one?) in the belief that 'a more centralised approach is needed to ensure the many and varied players along the food supply chain operate in a co-ordinated and strategic manner'. Hear, hear!!!


For CHOICE see here
For Coles and their current marketing strategies see here
Posted by Alison at 7:45 AM No comments: