In Defence of Christmas Pudding - Part One.

In One Continuous Picnic, Michael Symons calls the eating of Christmas pudding as part of an Australian Christmas ‘[t]he continuation of a quite unseasonable feast’ and suggests this eating of ‘plum pudding at 100 degrees in the shade’ is ‘perhaps the most oft-remarked Australian food oddity’. While he condemns the practice as eating against both the climate and the seasons he also sees it as ‘clear evidence that we had not made a home here’.[1] Other commentators similarly deride continuing what they see as imported traditions as symbolic of an inability to shake off the shackles of Empire. For Charmaine O’Brien, for example, eating Christmas pudding on Christmas Day represented ‘a connection to the values of Empire, a way of staking a claim to the mission of “upholding civilisation” on the far side of the world: weather be damned, this was serious cultural nourishment’.[2]

There is however ample evidence to suggest that, at least from the middle of the nineteenth-century, colonists in Australia were beginning to see their Christmas traditions as Australian rather than simply imitations of imported practices and were starting to reinterpret their relationship with ‘home’. When Ken Inglis says, ‘it would long be an Australian tradition to enjoy both the heavy Christmas dinner and the absurdity of it’[3] the important point is that, at least by the 1870s, colonists did appreciate the absurdity of the practice but persevered with it nonetheless. Subsequently, the Christmas pudding also became a symbol of Australian progress and national pride.

By the time English colonists arrived here in 1788 plum pudding was already a well-established celebratory dish for any festive occasion.[4] The connection with Christmas was cemented with the publication of Charles Dickens’ A Christmas Carol (1843) and the magazine, which he ‘conceived, commissioned, and compiled’, ‘Household Words’ (first published 1850).[5] As O’Connor notes

The Christmas issues of Household Words are of particular interest, for they show the Dickensian English Christmas in the process of construction and also demonstrate the extent to which Christmas, the Christmas pudding, nationalism, commerce, and empire were already, by 1850, conflated in the common culture.[6]

So, we might well ask what other dish could Australian colonists have served at Christmas dinner? A steaming boiled fruit pudding might well be considered 'a triumph of sentiment over environment' [7] but what other suitably celebratory dishes were there which didn’t involve literally slaving over a hot stove? What other pudding would substitute in a world without refrigeration and limited kitchen facilities? Fresh or stewed fruits with blancmange or creamed rice might be alternatives but hardly scream celebration.[8] Christmas plum pudding also had the advantage of being portable, prepared well ahead of time and acceptable to eat at room temperature.

One local tradition was celebrating Christmas out of doors. As Inglis demonstrates eating outside became accepted practice, and, for those born in the colonies, ‘knowing no other climate or society’ this form of Christmas festivity was not perceived as ‘an exotic institution transplanted but a round of activities performed spontaneously by Australians’.[9] While it was true that it was ‘no easy matter to set about the celebration of the holiday in the true English style’ it had to be admitted that ‘the substitute may, in all reality, be as good as the original; and to a native Australian may be far better than a vain and imperfect mimicry of customs his climate and his hemisphere will never permit him to reproduce’.[10] By 1859, in an article entitled ‘The Comicalities of an Antipodean Christmas’, the Argus admitted that ‘[i]n some sense an Australian Christmas is slowly being established’ conceding that ‘Plum pudding may be eaten in the open air’ (emphasis in the original).[11]

In the 1860s, the Illustrated Sydney News was extolling the pleasures of the Australian Christmas:

Christmas is bright and sunny; the flowers of midsummer deck the garden; all nature seems to woo us to enjoy ourselves out of doors and all seem eager to respond to the invitation – hence picnics and excursions by land and water are arranged as being a propos of an Australian Christmas.[12]

and illustrated the same with this sketch which clearly shows (at bottom right) a Christmas pudding being consumed in the great outdoors. 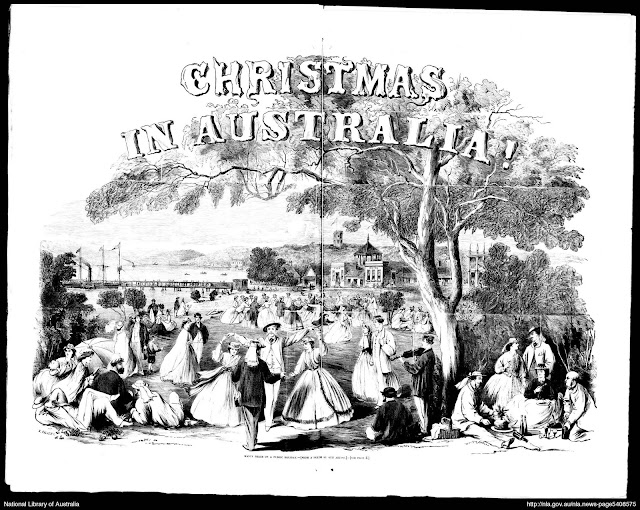 Similarly, the Sydney Morning Herald reported that in Melbourne on Christmas Day ‘thousands made their way out of town to sylvan retreats or sea-side nooks in which to enjoy their Christmas pudding’.[13]

In December 1866 readers of the Illustrated Sydney News were assured that:

We know of no English institution which has become so thoroughly acclimatised … Christmas cheer may be as well enjoyed under the shade of a spreading gum tree as cooped up in the heated atmosphere of a close room; and if it is not the most fashionable way of spending the day, it is at least the most seasonable and the most Australian, and as such we feel no hesitation on recommending it.[14]

Of course, not everyone thought the traditional Christmas meal worth preserving. There were, no doubt, many who would have agreed that ‘no dish was ever invented so wholly unsuited to the tropics as plum pudding’.[15] Melbourne Punch claimed the heavy traditional fare, Christmas cake, Christmas pudding and Christmas dinner, was both ‘dangerous to health and fatal to festivity’ but was optimistic that change would come ‘when we have sense enough and self-reliance enough to form our own ideals, and to uphold them’ and Australians would eventually turn to ‘light meals, light cakes and unnumbered fruits’.[16]

However, as the preceding illustrations demonstrate, there is evidence to suggest that in the years before Federation, as Nicole Anae puts it, the Christmas pudding was emerging as ‘a uniquely ambivalent “national dish’”’.[17] Anae interrogates selected verse-poetry of the late nineteenth-century and argues that it ‘offers a rich memorialization of the competing struggles between, on the one hand, the communal preserving of English modes of Christmas observance practices as the reference point for colonial celebrations, and, on the other, the communal realisation of the incongruity of such attempts in a new and alien land.’[18] The pudding becomes ‘both a sign of the “Mother Country” on the one hand and a problematic pejorative of Australian colonial identity on the other’. In other words, the Christmas pudding was becoming a symbol of not just John Bull Englishness and Old England[19] but was also being used to define Australian-ness as Australians began to see themselves as both part of the ‘imagined community’ of the Empire and their own colonial ‘imagined community’.[20] Anae’s discussion and the examples above also confirm that we should not underestimate the role of the press in creating and fostering these ideas of imagined communities.[21]