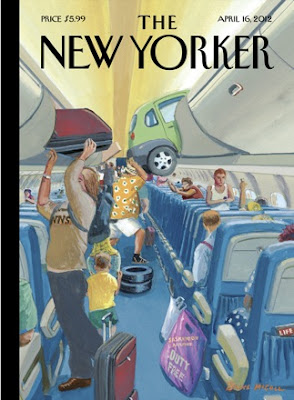 Although I hadn't planned to have a theme for each month for want of any better idea this month will have a New York flavour.

Since as always I can't resist a bit of a mix of food and history I should first recommend Mark Kurlansky's The Big Oyster. A Molluscular History of New York. This book provides a very readable history of the city from its earliest European settlement, some interesting oyster recipes and a very good bibliography for further investigation.

One of the new attractions in New York is the High Line Park a disused raised freight line which has been turned into an elevated park land. The High Line sits 30 feet above street level and runs through three now quite trendy areas - the Meat Packing District, West Chelsea and into the southern section of Hell's Kitchen. A street level railway had run through this part of town from 1847 but by the late 20's there was so much traffic in the area, bringing goods to and from the slaughterhouses, meat packing houses, factories and warehouses and the docks on the Hudson River, and so many accidents between trains and other street level traffic that it was decided something had to be done to make the situation less dangerous. Hence the West Side Improvement Project of which the High Line was a part. The first trains ran on the line in 1934 and took freight directly into some of the buildings including the huge National Biscuit Company complex (home of the Oreo) part of which now houses the Chelsea Market. Partly demolished in the 1960's the last train ran on the remains of the line in 1980. Concerted and determined efforts saw what was left eventually transformed into public space - the first section of the park opened in 2009 and a further section opened in June 2011.
A walk along the High Line offers an interesting perspective not only on the New York of today - you get up close to the only Frank Gehry building in New York as well as great views of other modern buildings and the vast housing projects in this part of town, and on a good day you can see right up along the river to the theatre district - but also an insight into the city's history - what must it have smelt like, looked like, sounded like when this really was the meat packing district and Nabisco were churning out Oreos?
For more information on the High Line see here and for the history of the National Biscuit Company in New York see here. And for some of the modern antics on the High Line see here for an art event with a food theme.


The Meat Packing District is home to many restaurants of one sort or another including Del Posto which is a very posh Italian restaurant (you know it's posh because they even give your hand bag a footstool to sit on) across the road from the Chelsea Market in the bottom of what was once also part of the biscuit factory complex. Posh or not they offer a $39 lunch which is sensational. The most memorable course was dessert - Sfera di Caprino ie. spheres of goat's cheese rolled in salty, sweet, crispy, crunchy bread crumbs and served with shaved celery, fig agrodolce and celery sorbetta. For someone who would not normally give celery very much plate space this was a revelation. 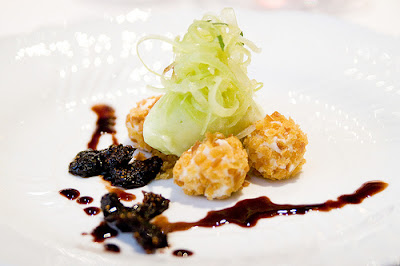 This photograph of Sfera di Caprino is from the Serious Eats review which you can read here.
Mario Batalli, one of the people behind Del Posto,  is quite a celebrity (see here for example and for his own site see here) and has a finger in more restaurants than I can remember. He is also involved with Eataly an enormous market hall cum eatery, 'the largest artisanal Italian food and wine marketplace in the world', which almost defies description. Best to go and have a look at their web site here. Like Del Posto, this is a multi-million dollar fit out of an old building in this case the Toy Building, once the home of the annual American International Toy Fair. The building, situated right at the Flat Iron Building and Madison Square Park, has an interesting history which you can read about here,  With 50,000 square feet of floor space devoted to everything Italian, well everything Italian you can eat, you could probably spend all day at Eataly - they certainly cater for breakfast, lunch and dinner. It's all a bit over the top but oh so tempting and the only time I have seen anyone shaping balls of fresh mozzarella outside a cheese factory.

There is more to New York than food. The Cathedral Church of St John the Divine is one of the non-food sights of New York so  an excuse for this article about fabric conservation there.

Think New York and you think The New York Times and The New Yorker - well I do anyway.
So from the Times  an article by Mark Bittman on Wendell Berry (here) American academic, writer and farmer , advocate of the simple life and traditional values of fidelity, frugality, respect for one another and the land. To find out more about him and to read his 2012 Jefferson Lecture ('It All Turns on Affection') see here.
And finally from The New Yorker an article by Daniel Mendelsohn  on the myth of the Titanic to mark the anniversary of its demise.

Posted by Alison at 6:55 PM No comments: 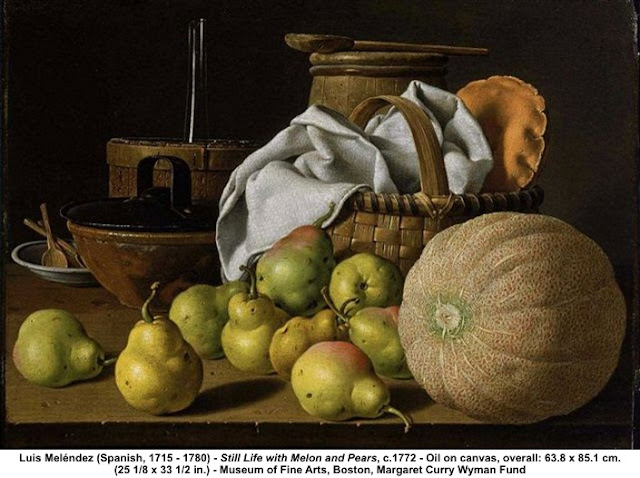 According to Gretchen A. Hirschauer and Catherine A. Metzger in Louis Meléndez, Master of the Spanish Still Life  (Yale University Press, 2009) this painting combines several of Meléndez favourite props. The wine cooler appears in at least ten other compositions, the large spoon, the basket, the kitchen cloth and the ceramic bowl with the iron lid all appear elsewhere.  Apparently only the group of three spoons in the plate on the left is unique. Even the melon turns up again in Still Life with Melon, Jug, and Bread. But what a magnificent melon!
The inclusion of this painting here is for no other reason than I thought some sort of illustration was long over due.

This month there is no particular theme, just a collection of interesting bits and pieces.
In February the Australian Government published Foodmap:An analysis of the Australian food supply chain. The aim of this study is 'to identify the scope for improved performance of the food industry in the face of changes in consumer preferences, pressures from the global food market and the strategic responses of major food sector participants'. The report, full of graphs and tables, makes for interesting if not inspirational reading. It will perhaps come as no surprise to learn that supermarkets account for 63% of household food expenditure of which 80% is controlled by Coles and Woolworths. Nor is it any surprise that the private label brands share of grocery categories has increased dramatically since 2002 and most of the brands we buy in the supermarket are foreign owned. Pasta and margarine are the only two categories where the brands are more than 70% Australian owned, and you can add to them bread, rice and smallgoods for those categories more than 50% Australian owned. Biscuits, canned fruit, cheese, canned fish, fresh dairy, frozen vegetables, milk and sugar are all less than 10% Australian owned.
The good news is that the report concludes that Australia has relatively high food security. That is  food security,as defined by the FAO - 'a situation that exists when all people, at all times, have physical, social and economic access to significant, safe and nutritious food that meets their dietary needs and food preferences for an active and healthy life'.
So the devil is in the detail somewhere - but perhaps not in this report.

Because I like my food with a bit of history here are two links to the past - How tea was picked in the late nineteenth century here and Salvador Dali and friends dining at a 'Night in a Surrealist Forest' here.

There is also another new journal, the 'International Journal of Gastronomy and Food Science', the first issue of which includes an article by our very own Neil Perry on dry aging beef. This isn't exactly light, bedtime reading but might be worth keeping an eye on in future. And another new and rather more scientific journal is 'Flavour' which you can look at here.

On the subject of reading, Claudia Roden has a new book out on the food of Spain - see here. You can read a recent interview  here and a much longer and very interesting piece by Jane Kramer for The New Yorker here.

Finally, some links on my special topic, eating out -
on taking photographs in restaurants here
on eating in the restaurant where you work here
on Mietta O'Donnell here
and finally this on what might be the newest trend in fast food.

And before I forget, the 19th Symposium of Australian Gastronomy will be held in Sydney over Easter 2013 (29th March to 1st April) and the theme will be 'The Welcoming Table'.
Posted by Alison at 10:37 AM No comments: