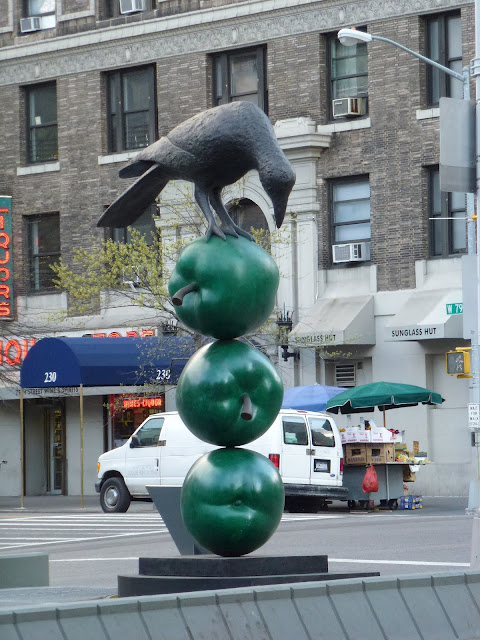 This is a photograph I took earlier this year of a delightful piece of street sculpture in New York which I encountered on my way to Zabar's on Broadway at 80th Street .
A crow about to start pecking holes in a big apple seemed an appropriate illustration for this month because New York has been so much in the news thanks to the coverage of Sandy the Superstorm. What struck me as most interesting was the amount of publicity an event like this receives simply because it occurs in New York - third world disaster hits first world city is somehow so much more news worthy than third world disaster hits third world country. From the food perspective it should also give us pause to reflect on how cut off we city dwellers are from our source of food and how reliant we are on electricity and road, rail and air transportation to provide adequate supplies of fresh food. Not surprisingly this is an issue which Edible Geography saw fit to cover - Nicola's post is here. Who would have thought that the best way to survive the storm was to sit at home eating peanut butter sandwiches and drinking beer?

While we are thinking about where our food might come from.... Many moons ago I worked in the food industry so I have spent my fair share of hours in factories processing food stuffs of one sort or another. Nonetheless I rarely bother to contemplate where or how convenience products are made - this is partly self-protection of course since the reality is often too gruesome to confront. However if you have ever wondered how hummus and babba ganoush get made on an industrial scale you should read David Lebovitz account from his travels to Israel. He doesn't mention the amount of hummus the factory produces on a daily basis but judging by the size of the bulk containers for the chick peas it must be quite a lot! And somehow its very reassuring to know that the gloved hand is still the best machine for removing charred skin from an eggplant.

Living in New York or Sydney for that matter you see very little food being grown. I know it is the latest thing to have a bee hive on the roof and for restaurants to have a kitchen garden but surely we aren't expected to believe that these beautifully manicured and very small kitchen gardens provide more than a fraction of the vegetables and herbs that the restaurant actually uses? I can't even supply a family of four with sufficient variety of fresh vegetables from my back garden. I do however support the idea that there might be more interest in where our food comes from if people were to see more of it growing. In many Mediterranean countries the streets are lined with citrus trees and the parks have pomegranates and olives and figs and hedges of rosemary. The best I have seen in Sydney are some borders of parsley in city flower boxes. One of the reasons, so I am told, for not encouraging the use of fruit tress in local streets is because they are messy - what if someone slipped on the dropped fruit and sued the council? But surely all the fruit would have been picked long before that could happen? Unfortunately removing dirt and messiness and smell from our neat and ordered urban environment has become a serious preoccupation, although of course there are other, complicated reasons for the disappearance of fresh food from our streetscapes. Earlier this year the BBC ran a series of documentaries on London markets which address some of the issues - you can read about the series here. There is a precise by Edible Geography here and a glimpse of Billingsgate fish market here.

Finally, if you haven't already seen these pictures you might take a deep breath before you look here at photographs from an exhibition of cakes held recently at the Pathology Museum, St Bart's Hospital in London. And on the subject of cake you may remember that back in June I mentioned the Endangered Cake Museum - well I am very pleased to report that it will have a new home, which you can read about here.
Posted by Alison at 4:42 PM No comments: