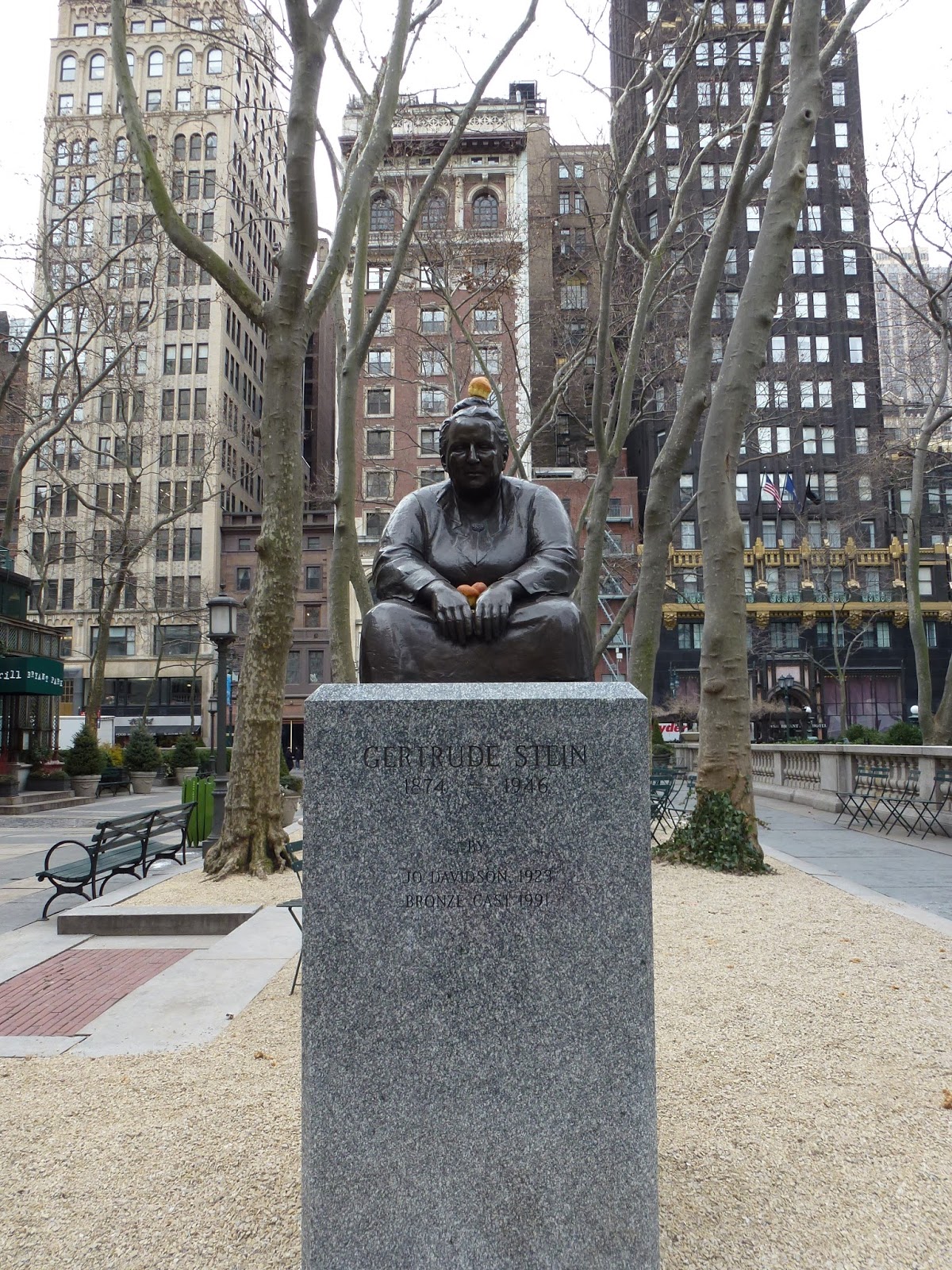 The trouble with research is that you never know when you are finished. People, places and things that you are interested in keep coming back to haunt you.
This photograph of the Gertrude Stein statue  in Bryant Park, New York was taken on 7 February. Either someone knows how much she liked her little cakes or they are a gift to celebrate her birthday (on 3 February).
For more information about the statue see the Bryant Park Blog here. Bryant Park itself has an interesting history which you can read about here. I came across Gertrude (well to be truthful I was looking for her) en route to the New York City Library to see the Lunch Hour NYC exhibition (which I have mentioned before and you can read about here) but not before I also encountered Carl Van Vechten's name carved into the sandstone in the library foyer.
So can Alice be far behind? Well since I last wrote about her cookbook I have encountered more information about her too. Deanna Sidney at Lost Past Remembered here introduced me to  Naomi Barry's essay in Remembrance of Things Paris: Sixty Years of Writing from Gourmet. Then reading Laura Shapiro's Something from the Oven. Reinventing Dinner in 1950s America I discovered a whole chapter on Poppy Cannon who collaborated with Alice on Aromas and Flavours of Past and Present. (which I wrote about here). Poppy herself was a wonderful character and I thoroughly recommend Shapiro's thoughtful account of her life and her legacy.
Another recent read was John Thorne's Simple Cooking which includes his review of The Alice B. Toklas Cook Book written on the occasion of the publishing of a new edition by Harper & Row in 1984. In his usual thoughtful way he begins with the problem of the aura which seems to surround everything to do with Stein and Toklas and the warning that unless you approach The A.B.T.C.B. with more than 'a few scattered impressions' about Gertrude and Alice 'you may well begin reading with puzzlement and soon sink into total disgruntlement. Because, while it would be wrong to say that this is a terribly overrated cookbook, it is very much a wrongly reviewed one.' Of the recipes he says  'they do not contrary to the reviews, make you want to rush into the kitchen and try them out' because although a cook book  the pleasure  lies elsewhere,

' to enjoy this book you must find your pleasure in the company of Alice B. Toklas - in a woman who knew exactly who she was. It is this that gives the book its measure of wild charm and also draws its limits, for she was a person of intense domesticity who, having established her realm, felt totally independent within it.
While the gaze she directs at the famous people who grace their table is alert, curious, even sensitive, it is also finally enigmatic, for they have no real impact on her perfect sense of self.' 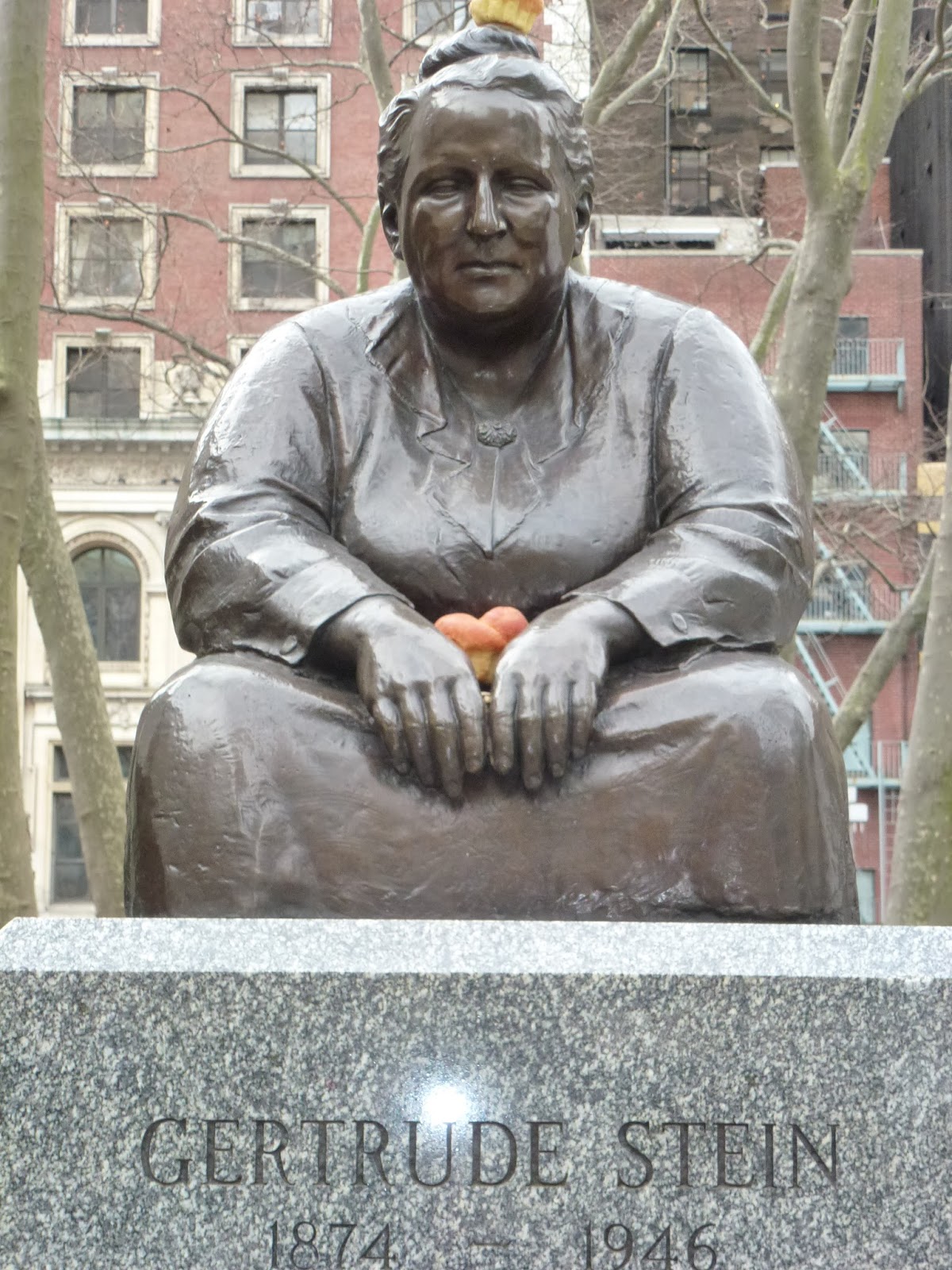 And of Alice's relationship with Gertrude he says
'There is never one false note in the impeccable ordinariness with which she surrounds that liaison to ever suggest she was ever surprised, frightened, or intoxicated by what happened to her, by the sui generis nature of her life.'
John Thorne, Simple Cooking, Viking, New York, 1986.
Laura Shapiro, Something from the Oven. Reinventing Dinner in 1950s America, Penguin Books, New York, 2004.
ed. Ruth Reichl, Remembrance of Things Paris: Sixty Years of Writing from Gourmet, Random House, 2004﻿
﻿
Posted by Alison at 2:11 PM